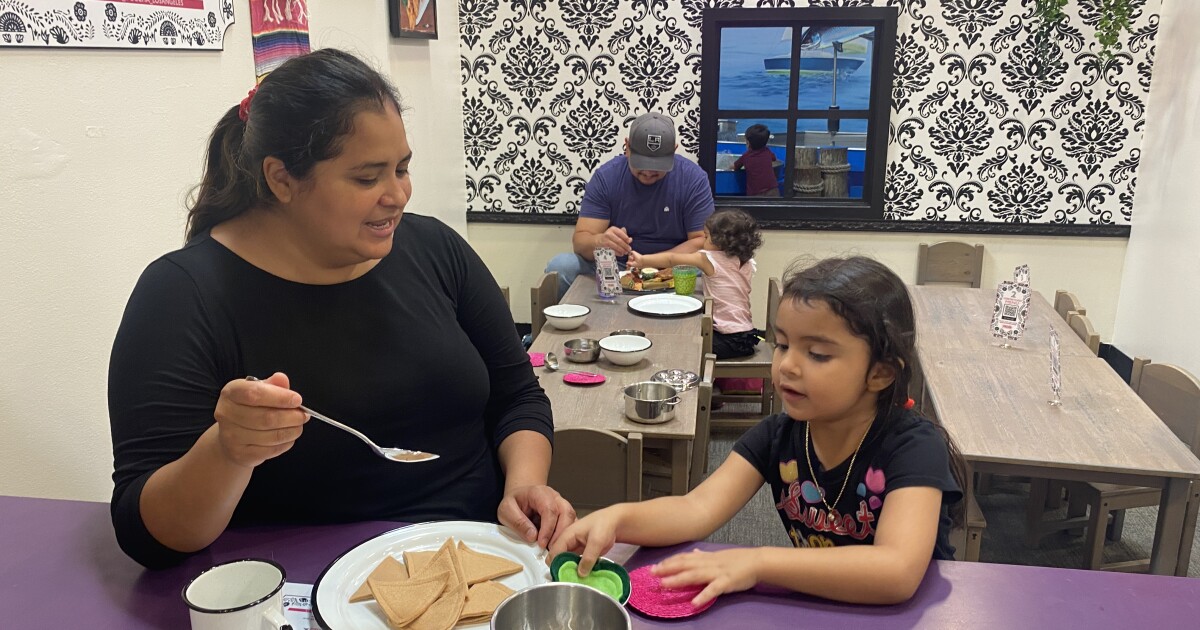 Start your day with LAist

Sign up for How To LA, delivered weekday mornings.

A a new restaurant has opened in Irvine to celebrate the independence days of Central America and Mexico. Well, to be precise, a miniature restaurant.

The venue, Pocha, was buzzing until lunchtime. The plates were filled with chilaquiles, eggs, beans and tacos. Some of these plates ended up on the floor but were quickly picked up by servers.

“Mom, what do you want to drink?” she asked.

Here at Pocha, an interactive exhibition at Pretend City Children’s Museum in Irvine, all food items are inedible and made of plastic, rubber and fabric. The exhibition is a reduced version of Claire Risoli’s restaurant Pocha LA at Highland Park.

The museum proposed the project to Risoli then dined at his restaurant to come up with ideas to recreate it for children.

“I love the idea of ​​being able to teach diversity and culture, inclusion and equality through food,” Risoli said when opening the exhibit on Friday.

That’s the idea behind the restaurant in Pretend City, which changes periodically to showcase dishes from different cultures (the previous restaurant’s theme was Korean barbecue).

Pocha, or male pocho, is a sometimes pejorative term for Mexican Americans deemed to have forgotten their roots, such as not knowing Spanish. But Risoli has come to embrace her pocha identity.

In addition to learning about the many cultures that make up Orange County, Pretend City COO Maria Tinajero-Dowdle said playing in the mock restaurant helps teach children cooperation.

“You see kids who don’t even know each other and it’s like someone is taking the order, someone is cooking, someone is serving the other person’s parent,” she said.

In the crowded dining room, Carmel’s brother, Thomas, 3, served a plate full of what looked like everything on the menu to their father, Eduardo. He said they like to pretend to cook and serve food.

“I think pretending they’re doing this reminds them of their parents and grandmothers,” he said.

The Pretend City Children’s Museum’s Pocha mini-restaurant will be open until spring 2023.

Tickets:
$19.95 (children under 1 are free)
Reduced rate for seniors, military and families presenting their EBT card

More details on how to visit are available on the museum website.

Debt consolidation loan: what you need to know