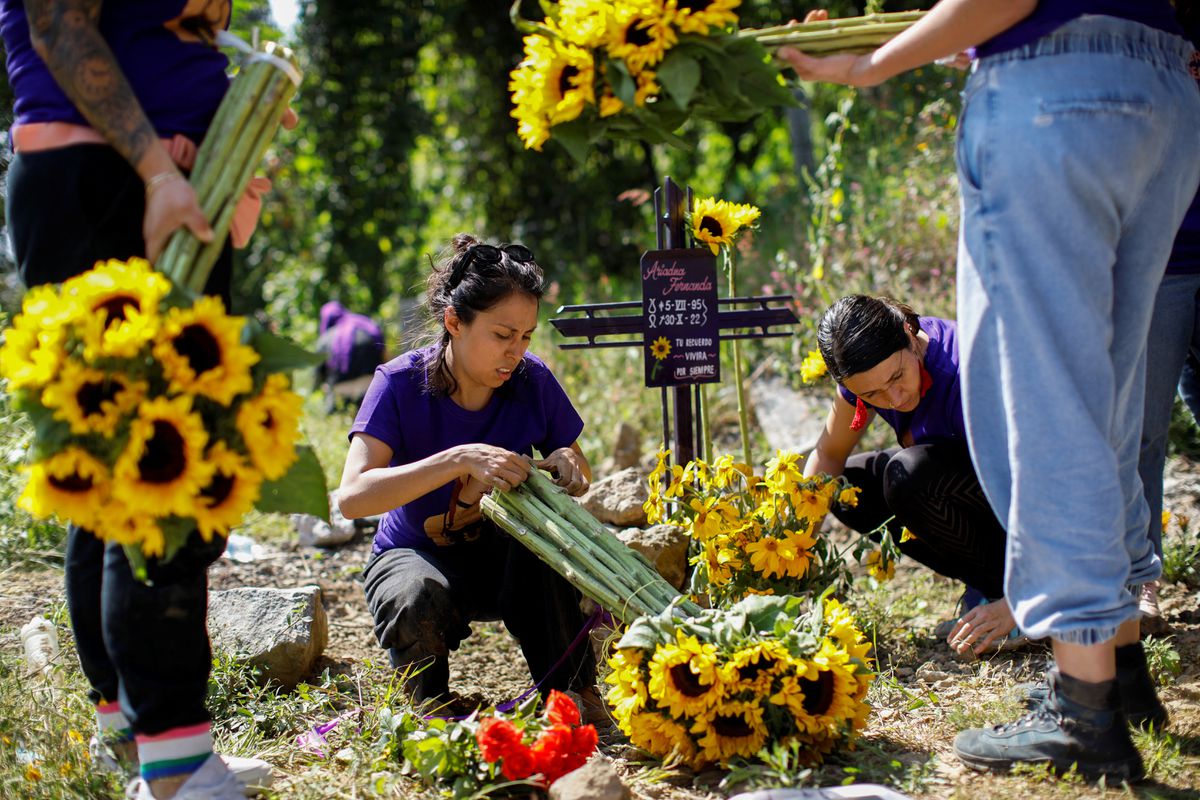 A sports bar in the trendy neighborhood of Condesa in Mexico City was the setting where Ariadna Fernanda López crossed paths with those currently detained for her femicide. After her mother’s death – four years ago – López found work as a waitress at Sixtie’s, where she met Rautel Astudillo, a wealthy customer, and Vanessa Flores, a colleague. Today, both are being prosecuted for his femicide. While working there, she also made many friends, who spent that week seeking justice from conflicting political and judicial authorities. The death of Ariadna, 27, has rocked a country that for the first time saw a man mourn his death on camera and days later saw the same man carry his lifeless body while walking away. ridding. The case reopens the debate about the weight of money and influence in a broken justice system that barely punishes abusers.

Ariadna’s face was painted, like those of many other women murdered in Mexico, on the banners made by her friends to protest femicide. Her relatives remember her as a very funny girl with a happy vibe who loved classic rock and comedy. She also carried great sadness since the death of her mother; her father did not keep in touch with her, and her three half-siblings barely spoke to her, says her friend José Luis Guzmán. After her mother died, they kicked her out of the house where she lived with her. Suddenly she was in the street. “One day, they changed the locks and she couldn’t come in anymore,” says another friend, who prefers not to reveal her name. This led her to work at Sixtie’s, until the pandemic hit. She then lost her job and opened her own nail business.

On Wednesday, November 2, after no one had heard from her for two days, her friends recognized her body in a social media post. A couple of cyclists had found her lifeless by the side of a road in Tepoztlan, Morelos state, and posted pictures of her tattoos online so her family could identify her. The police investigation reconstructed part of Ariadna’s last moments: on the night of October 30, she went to Fisher’s, a restaurant in the Condesa district, to meet Vanessa, Rautel and others. After about an hour, she got into a truck with the others to drive to the accused’s apartment.

Footage from building cameras shows the group in the parking lot, exiting the truck and entering the apartment. Inside – Vanessa told Ariadna’s friends – were a bodyguard named Ernesto and his wife, the accused’s brother, the couple currently in custody and the victim. The videos show the friends leaving the apartment half an hour later, around 7:45 p.m. Ten minutes later, at 7:55 p.m., Ariadna’s last WhatsApp activity was recorded. The next day, around 10:27 a.m., Rautel’s personal driver is seen arriving at the site and leaving after a few minutes. Half an hour later, the alleged killer appears carrying the body, already with rigor mortis, and loading it into the truck. The latest footage shows Rautel leaving, heading for Tepoztlan, where his body will later be found.

What happened during the 15 hours Ariadna was locked in the apartment with Vanessa and Rautel is up for debate. The Morelos prosecutor’s office, which took over the case after the body was found in this condition, said she choked on her own vomit. Two days later, the Mexico City prosecutor’s office contradicted this version, stating that the Ariadna had been murdered and that the cause of death was multiple trauma. Additionally, he issued warrants for the couple’s arrest and said that during a search of the property, blood was found on the floor, in the bedroom and on a cushion. Thanks to the conclusiveness of the video footage, the two detainees are being prosecuted and Claudia Sheinbaum, mayor of Mexico City, has accused the Morelos prosecutor’s office of trying to cover up the femicide.

Rautel distinguished himself at Sixtie’s as a wealthy man who arrived in armored trucks with at least two bodyguards. On a normal night, he could spend 80,000 pesos (about $4,000); once he ended up paying a bill of 150,000 pesos (about $7,600), according to employees at the place. His house was only a few blocks away and he used to go there several times a week. He had had love affairs with several waitresses, and he had also met Vanessa, his current girlfriend. According to the authorities’ investigation, he had a criminal record for damage to the property of others.

Two young women who worked there as waitresses told EL PAÍS that Rautel was the kind of customer who arrived, bought many bottles of alcohol and offered shots to all the girls. At Sixtie’s, not only are workers allowed to drink with customers; they are rewarded with commissions. The more drinks they buy, the more they get paid at the end of the month. “Many did not want to deal with Rautel, because all the girls who came out of his table were generally in a terrible state”, says a waitress who prefers to remain anonymous. She explains that the monthly salary there is 3,000 pesos, or about $150. The girls were used to him inviting them to “continue the party in his apartment,” she adds; this is exactly what happened last night when Ariadna was seen alive.

The source of Rautel’s money was a mystery to Sixtie’s employees as well as other customers, who repeatedly asked him. “Customs officer,” was his response. The authorities’ investigation uncovers a network of businesses owned by him and his family. The accused of femicide has two companies named after him: Cargo Conexión System and RFC y Asociados. The first is a parcel and courier company and the second is a private security. The parents own several businesses, among others, selling computer equipment, polyurethane belts for cars, office furniture and car washes. One of his brothers is a lawyer and the other works for an airline. Almost all of them live in affluent neighborhoods in Cuernavaca, the capital of Morelos.

The reality of Ariane contrasted with this richness; Vanessa’s too. The 20-year-old met Ariadna through other friends who also worked at Sixtie’s. According to the police investigation, she was born in Ecatepec, one of the most dangerous municipalities in the State of Mexico, with one of the highest rates of femicide in the whole country. His last place of residence was in the neighborhood of San Felipe de Jesus, a dangerous area in northern Mexico City dominated by fighting between organized crime groups. She had been a waitress at the bar, her colleagues say, but quit her job a few months ago because Rautel offered to give her the same money she earned, in cash, if she did.

When they learned of Ariadna’s death, her friends forced Rautel and Vanessa to come out with a statement about what happened that night. The suspected feminicides have agreed among themselves to cooperate with the authorities, but “pay attention to the details”, he told her in a message conversation to which EL PAÍS had access. On November 2, they all agreed to meet and go to the prosecutor’s office in Morelos together. Rautel, who used to get around in a GMC truck worth around two million pesos (about $100,000), arrived in “a nice old car”, recalls another friend who didn’t didn’t want to give his name, “as if he wanted to go unnoticed. Each gave their version of events to the authorities, but the statements of the couple were later denied by the images presented by the government of Mexico City.

The two defendants are now facing legal proceedings for the crime of femicide. In her first statements to authorities, Vanessa said she didn’t know anything about what happened because she was sleeping; that she just woke up and her boyfriend told her that Ariadna was gone. Rautel said he didn’t remember anything because he was drunk. The Sunday when Ariadna disappeared, at 5:55 p.m., a few minutes before arriving at the restaurant to meet Rautel and Vanessa, she posted a singular sentence that still remains on her Facebook account: “Are you going to miss me? An uncomfortable mockery of fate filled with parting comments and reactions from all who knew her. Like so many other women murdered in Mexico, Ariadna is survived by her friends, those who fought for some justice, and a seven-year-old boy who no longer has a mother.