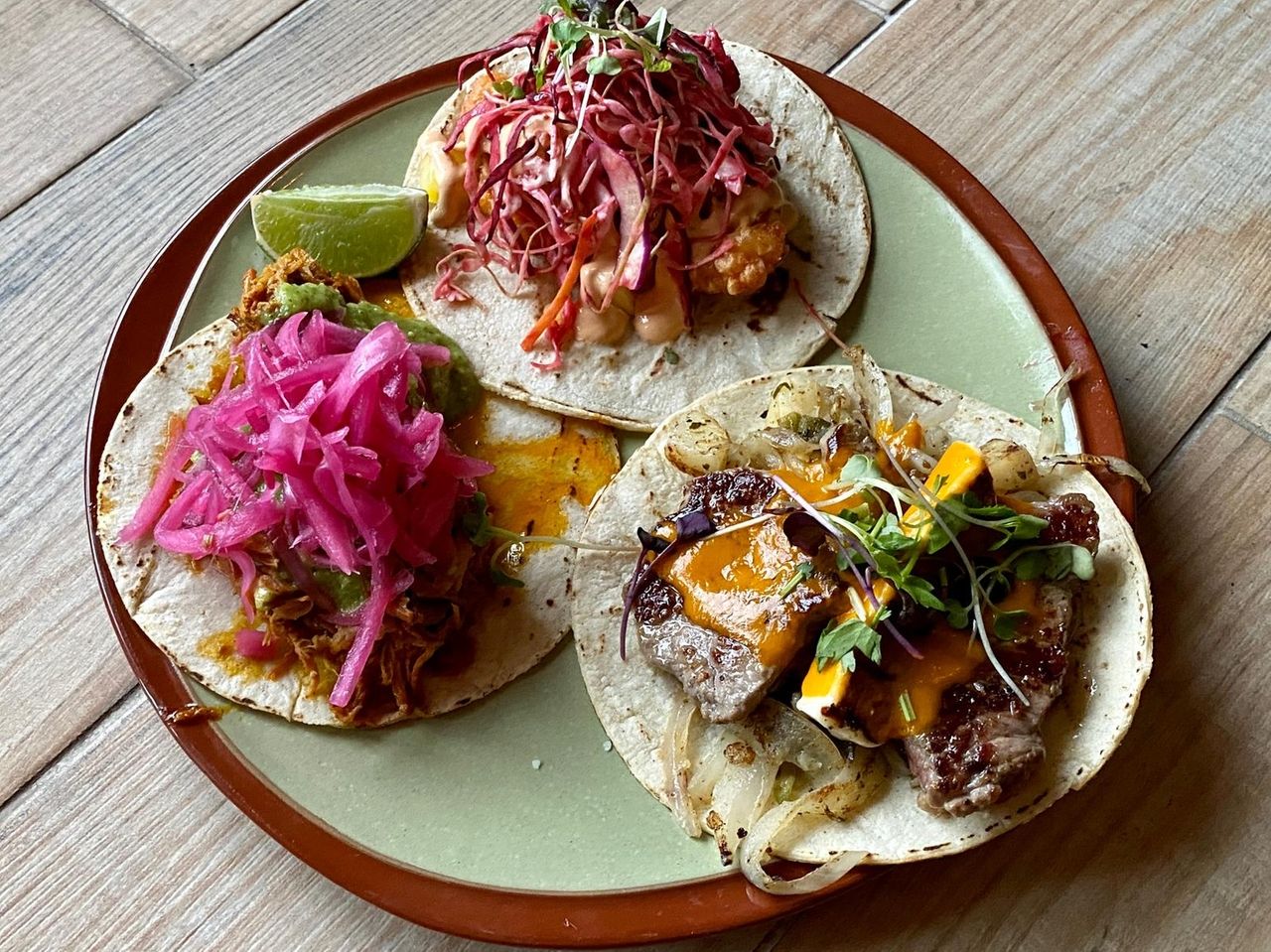 José Castillo knew in an instant that the vacant storefront at 30 E. Main St. in Patchogue was the perfect place for a second Ruta Oaxaca. He and his partners, chefs (and brothers) Carlos and Felipe Arellanos, had opened their first Mexican restaurant in Astoria, Queens, in 2021, but all three are Besito alumni and Long Island was always on their minds.

Patchogue, he knew, was bouncing. And the wooden rafters on the ceiling and the large patio out back reminded Castillo of “a little Oaxacan casita.” Plus, the space had some good taco karma, having housed Swell Taco from 2017 until the end of last year. But where Swell’s dishes had taken inspiration from laid-back California surf shacks, Ruta Oaxaca, which opened in late March, aims to showcase all the intricacies and refinements of authentic Mexican cuisine.

Ruta Oaxaca names the city (pronounced “wah-HAH-kah”) in southern Mexico that is renowned for its cuisine. The Arellanos brothers were born and raised there, and their menu features many of their mother’s recipes, especially the complex chili-based sauces called moles. You’ll find the haunting mole negro, unabashedly charred and chocolate-tinged over an entrée of chicken buñuelos (fritters) atop sweet plantain puree, headlined by a chicken enchilada with queso fresco and crema, and beef short ribs served with potato croquettes. The brick-red taupe coloradito appears on a grilled New York strip loin steak with sweet plantains and a nopales (cactus pads) salad.

The chefs are not limited to Oaxacan cuisine. “‘Ruta Oaxaca’ is the road to Oaxaca,” said Carlos Arellanos. “On the way, you pass Mexico City, Puebla, Chihuahua, Chiapas. Then you come to Oaxaca and taste the best of the best. His biggest Mexican hits include guacamole, nachos, and quesadillas, as well as grilled fish with corn sauce, chipotle-marinated shrimp with pineapple salsa, and even tortilla-crusted fried calamari.

Arellanos calls his cooking “homemade gourmet,” meaning he uses old-fashioned methods (to make his own fresh tortillas daily, for example) but the plates “are dressed up.”

His hand-made tortillas are the basis of six tacos, including cochinita pibil (slow-roasted pork in a banana leaf), fried fish with chipotle aioli, and steak with chile de arbol salsa. Orders of three tacos range from $19.95 to $24.95. Most entrees are under $15; most entrees under $30. Ruta Oaxaca also serves brunch daily, from noon to 4 p.m., with a menu that includes huevos rancheros and chilaquiles (a mix of tortillas, fried eggs, avocado, and more).

Originally from El Salvador, Castillo is the only non-Mexican member of the team, but during his years at Besito he developed a deep appreciation for Mexican spirits tequila and mezcal, both made from the plant of agave but the former distilled from steamed agave, the latter, from smoked agave.

Ruta Oaxaca stocks dozens of artisanal varieties of each, and Castillo can often be found lecturing customers on their intricacies. He’ll host a vertical tasting or even serve them in his own version of the tradition: the tequila comes with piquin pepper seasoned with salt, lime and chapulines, the fried grasshoppers that are an Oaxacan delicacy. The mezcal comes with a slice of orange and fried chinicuiles, a variety of caterpillar that feeds on agave and is also found in some mezcal bottles.

When Ruta Oaxaca holds its grand opening ceremony on Monday, mezcal and tequila tastings will be offered, along with past hors d’oeuvres. For more details on the grand opening, go to the restaurant page Facebook page or instagram.