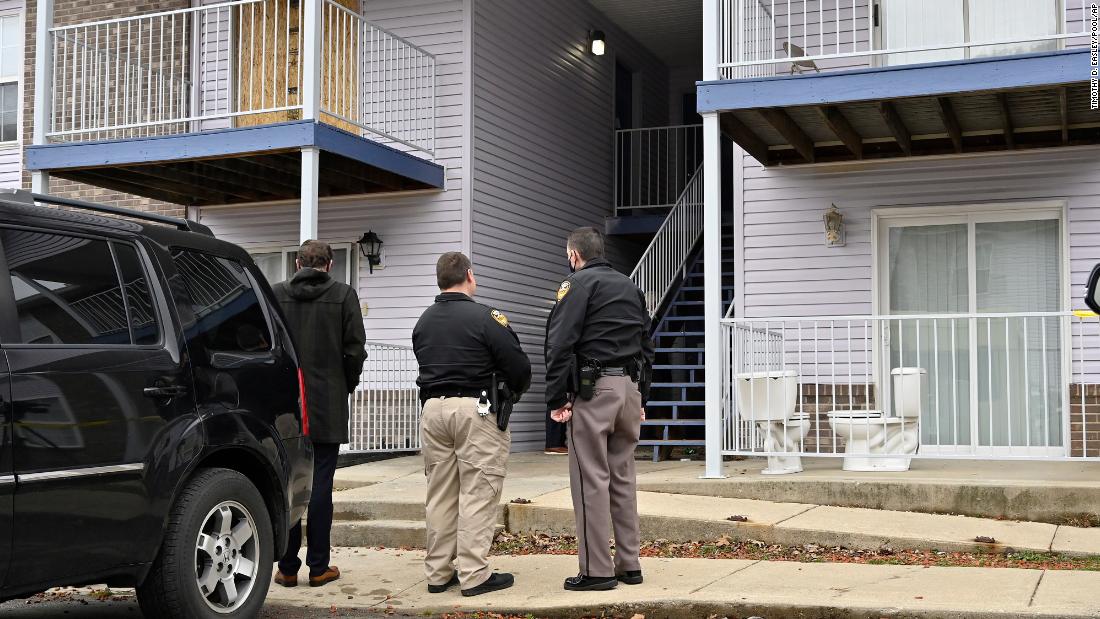 The group of 12 jurors and three alternates toured Taylor’s apartment, the next-door neighbor’s apartment where Hankison’s bullets also entered, and the exterior of the apartment complex building.

The visit took place so that the jurors would be better able to understand the evidence presented to them in court, Judge Ann Bailey Smith told them before leaving the courthouse. After the visit, the jury was dismissed for the weekend, with testimony due to resume on Tuesday morning.

Hankison’s charges are unrelated to Taylor’s death, which has sparked nationwide outrage and protests. The former Louisville, Kentucky officer is facing charges because, during the narcotics raid on Taylor’s apartment, he fired 10 shots – allegedly indiscriminately – endangering a man, a wife and child in the apartment next door, Kentucky Assistant Attorney General Barbara Whaley said. .

No one has been charged in Taylor’s death.

On Thursday, the jury heard a nearly hour-long taped interview that Hankison gave to an investigator on March 25, 2020, 12 days after Taylor’s fatal shooting. He said he opened fire because he believed someone from inside Taylor’s apartment had fired at the group of officers who broke down the door. Hankison said he believed the shooter was firing an “AR-15 rifle or long gun.” At one point in the interview, he said he felt “helpless”.

Kentucky Assistant Attorney General Barbara Whaley said in opening statements Wednesday that only a Glock pistol was found inside the apartment. sergeant. Jason Vance, who was part of the police department’s Public Integrity Unit, said no AR-15 casings or bullets were recovered during investigators’ search – and there were no evidence that this type of weapon had been fired.

Defense attorney Stew Mathews said there was no evidence of an AR-15 in the apartment, but suggested in his opening there might be one.

Hankison told investigators his only option was to retaliate after another officer, Sgt. Jonathan Mattingly, was shot. His bullets didn’t hit Taylor.

“I almost felt at the time that they were all doused with bullets,” he said in the interview.

“As soon as I fought back through that window, the threat stopped,” Hankison said in the interview.

In his opening statements, Whaley told jurors that “it’s not about deciding who is responsible for Breonna Taylor’s death,” or the search warrant conducted or reforms at the Louisville Police Department, but rather of Hankison’s actions and the “circumstances in which he acted.”

The prosecutor argued that Hankison “fired into the building” and his “bullets passed through” two apartments – including Taylor’s – nearly hitting neighbor Cody Etherton.

Etherton testified on Wednesday that he was woken up as officers broke through Taylor’s door nearby and recalled pieces of flying drywall and debris hitting him as he fell to the ground after hearing fire. The gunshots were followed by silence before he heard officers announce themselves and urge someone to get down, Etherton said.

“An inch or two more and I would have been shot,” he told the court.

Mathews said Hankison reacted appropriately during a chaotic situation that he saw as a threat to himself and others. The veteran officer’s actions were “logical, reasonable, justified and completely logical”, he said.

Hankison will speak in his defense, Mathews said.

CNN’s Ray Sanchez and Jason Carroll contributed to this report.

A long-awaited Mexican restaurant is now open in Worthington – 614NOW

“We chatted as we walked the two blocks to his apartment”