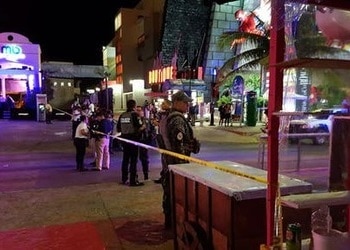 Criminal groups in one of Mexico’s most popular tourist regions have found another industry to extort and terrorize: hotel builders.

Everyone – from engineers to plumbers and painters – is systematically extorted when building Cancun hotels, according to a survey by Aristegui Noticias in alliance with Connectas. When workers or their employers do not pay, they have been tortured, disappeared and even killed, according to testimonies from victims and their families.

A map in the report highlights several hotels built along the Caribbean coast of the state of Quintana Roo – home to the popular beach destinations of Cancun and the Riviera Maya – that have been targeted by criminal groups.

The operating mode is always the same. When the construction of a hotel begins, criminal groups demand what are called “rights floors”, weekly fees from the construction workers or their bosses. For lower-level employees, many of whom come from other Mexican states, the quota can represent a third of their earnings, according to the survey.

Construction workers were also forced to work for the criminal groups themselves. They “are captured and taken away, first to help sell drugs, then they are converted into contract killers,” Quintana Roo attorney general Ã“scar Montes de Oca told Aristegui Noticias.

According to James Tobin Cunningham, a member of the National Security Council of Mexico cited in the report, between 30,000 and 40,000 construction workers could be victims of this type of scheme. However, few complaints to the authorities are registered, out of fear.

The tourist corridor of the Riviera Maya, visited by more than a million people per year, attracted criminal groups involved in various illicit activities, including extortion of restaurants and bars, street drug sales and human trafficking. It was only natural that they began to target the hotel construction sector, which has seen major growth in recent years.

Several criminal groups are present in the Riviera Maya, including the two most powerful cartels in Mexico, the Jalisco Cartel New Generation (Cartel Jalisco Nueva GeneraciÃ³n – CJNG) and the Sinaloa Cartel. Remnants of the Gulf cartel and the Zetas are also present, while foreign groups like the Romanian mafia have also found a foothold there.

Due to its perch on the Caribbean Sea, the region also serves as a gateway for cocaine arriving in Mexico via Atlantic routes from South America. In September 2020, for example, almost three tons drugs were seized in the port municipality of Mahahual.

Criminal groups now regularly compete for control of territory and illegal activities. In 2020, the state of Quintana Roo registered 581 homicides. In December of this year, more than 160 disappearances were reported. At least three local politicians were also shot dead, apparently after receiving threats from criminal groups.

Although significant efforts were made by authorities in Quintana Roo to fight organized crime, authorities often downplay violence targeting people who are not tourists to maintain an image of security.

For example, in January, the Planet Hollywood hotel in Cancun opened with great fanfare. Two months earlier, however, authorities had found the remains of four workers reported missing on land adjacent to the hotel. Family members have claimed it could be an underground grave, where other remains could also be found, but saw no further investigation.

“All [the homicides] are deplorable, but as a state that lives off tourism, we must take care of our raw material, which is tourism, so that [tourists] don’t decide not to come, â€said prosecutor Montes de Oca, according to Aristegui Noticias report.

We want to maintain the largest organized crime database in Latin America, but to do so we need resources.

What are your thoughts? Click here to send your comments to InSight Crime.

We encourage readers to copy and distribute our work for non-commercial purposes, with attribution to InSight Crime in the signature and links to the original at the top and bottom of the article. Check the Creative Commons website for details on how to share our work, and please email us if you are using an article.