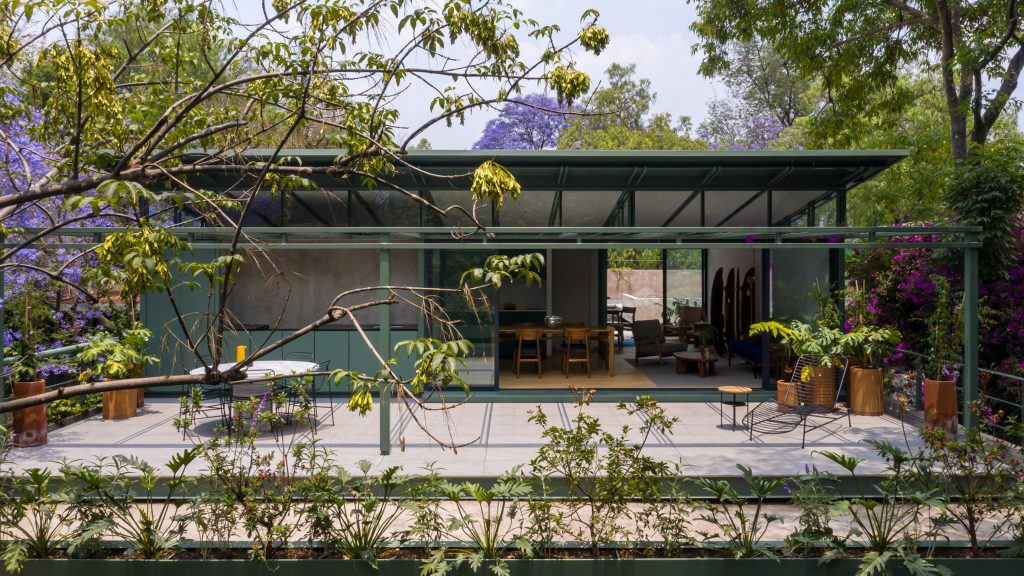 Architects Ana Nuño de Buen and Luis Young used a green metal frame to form the structure of a spacious apartment built atop an existing building in Mexico City.

The Cascada House was designed by Mexican architects Nuño de Buen and Young to provide a self-contained unit atop a 1950s concrete building. It is located in the Pedregal neighborhood of San Ángel, a sought-after neighborhood in southern the city.

The apartment covers 140 square meters and connects to the existing house below via an open stairwell.

Its profile is defined by two roof pitches, which flow to a central gutter running along the main axis of the addition. These rooflines open the interior spaces to views of the surrounding treetops.

Nuño de Buen and Young placed the services of the small house at the lowest point of the roof line, to allow for higher and brighter living spaces at the front and rear of the property.

To one side is an open concept living room and dining room, with a small kitchenette. This opens onto a generous patio via sliding glass doors.

“Thanks to large glass panels that open wide, the house integrates with the surrounding vegetation, dissolving the boundary between inside and outside,” they explained. 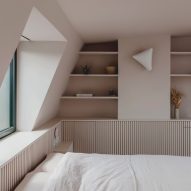 On the other side, the living room extends to form a secondary seating area. This space is furnished with a desk and a pair of armchairs, and can be used as an office or for meetings.

It is used for the steel structure, which is left exposed, as well as for cabinets, railings and window frames.

Wide-plank wood floors are used in the interiors, and the furniture is by Taller Nacional, a Mexico City design agency.

Ana Nuño de Buen and Luis Young met at the Universidad Nacional Autónoma de México (UNAM) school of architecture in Mexico City and have been collaborating professionally since 2017.

Other projects in Mexico City include the renovation of an apartment in the famous CUPA tower by local firm Escobedo Soliz, and a courtyard block with a “secret garden” at its center, by CPDA Arquitectos.

The photograph is by Luis Young.

This Upland Vegan Mexican Restaurant Added Eggs and Dairy to Their Menu During the Pandemic, and Now They Have One of the Inland Empire’s Best Breakfast Burritos