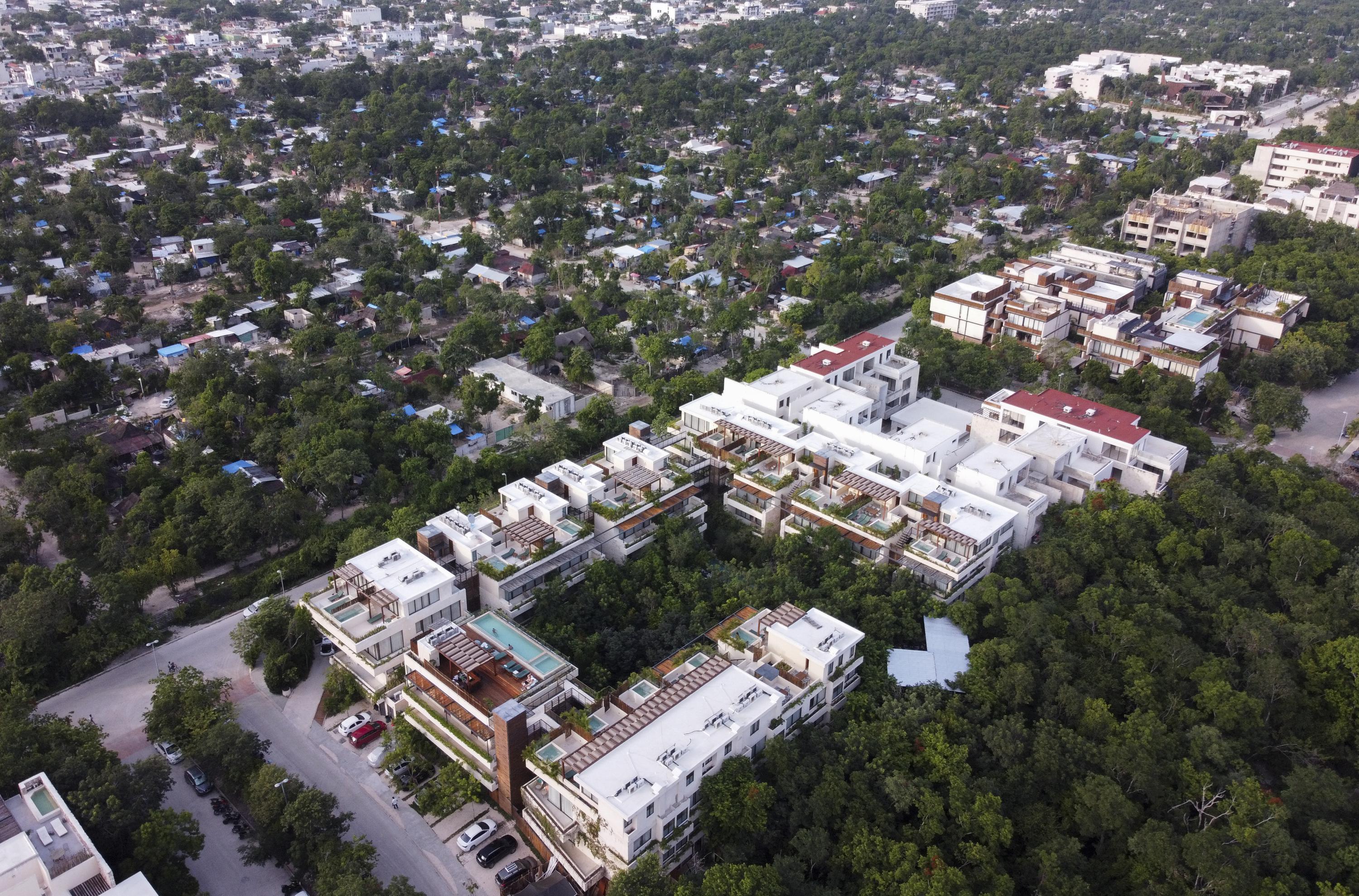 TULUM, Mexico (AP) — Unchecked development has hit this once laid-back beach town on Mexico’s Caribbean coast so hard that developers are now eager — even desperate — to build condominiums and hotels in a slum.

In the latest clash on July 27, police accompanying a backhoe fired tear gas and attempted to topple the homes of some squatters in the shadow of a new balcony condominium building. The attempt ended when the wind blew the gas back onto the officers, who retreated under a hail of rocks.

The contrast between rich and poor is stark: Shiny white four-story condos with vaguely Mayan-sounding names and English slogans like “Live in the Luscious Jungle” and “An immersive spiritual experience” stand next to shacks made of poles, packing crates, tarpaulins and sheet metal roofing.

On a coast where uncontrolled resort development has already closed most public beach access – there are only a few public access points on the 80-mile (130km) stretch known as the Riviera Maya – residents of the squatter camp may have reason to ask if poorer Mexicans will be allowed here.

Quintana Roo state officials pledged to relocate or evict approximately 12,000 residents of the 340-acre (137-hectare) October 2 Settlement. It was founded in 2016 on highly prized, formerly public land a few blocks from the town’s main street and about 1 1/2 miles (2 kilometers) from the shore.

Such land invasions are common throughout Mexico. Many are quickly eradicated. But others are gradually integrating into their cities. Up to 250,000 people are thought to live in squatter communities on the outskirts of Cancun.

Squatter leader Jose Antonio León Méndez, a welder who has lived in Cancun and Tulum for about three decades, says he — like many squatters who work as cooks, gardeners and builders in surrounding condos and hotels — was tired of knowing that he would never be able to afford a home in cities that were increasingly filled with foreigners.

“How can a Mexican be an ‘invader’ in his own country? That does not make any sense. It’s like saying someone steals something that belongs to them,” said León Méndez. “These people are not thieves; they are the workforce of Tulum.

“We have no personal problems with foreigners, but they must respect our rights,” he said, adding that October 2 represents a final battle for Mexicans being deported from their own coast.

The settlement is part of a larger 500-acre (200-hectare) swath of public land that was sold by city officials to largely foreign developers in the 2000s.

Condos on the edge of the camp – and some well inside – now sell for between $100,000 and $150,000 and are advertised in US dollars – as are entrance fees at many resorts. Around Tulum, $20 a day is considered a good wage. So it would take decades of wages for the average Mexican worker to buy one.

Montes de Oca says officials plan to relocate the squatters: “We will offer them land away from this area, provided by the state government. … Businessmen will bring money to build houses.

“This will push 70% of these people to leave voluntarily, with the certainty of having decent housing,” said Montes de Oca. Asked what would be done with the remaining 30%, he replied: “Other means will be applied”.

“We are not going to allow them to continue selling the land to foreigners while they send us locals, who have lived in Quintana Roo for 15, 20 or 30 years, living 20 kilometers (12 miles) away in the woods. “, did he declare. said. “It’s not negotiable.”

Considering the cost of taxis and tourist-oriented bus routes, the journey from a new settlement could cost workers a quarter of their daily wages.

Street-level drug trafficking is the source of many murders in the October 2 Camp, just like in the rest of Tulum. In October, two tourists – one an Indian-born Californian travel blogger and the other German – were caught in the apparent crossfire of rival drug dealers and killed at a restaurant along Tulum’s main avenue. .

Victor Reyes, a Tulum resident who works in real estate, estimates that about 70% of condominium investment comes from foreign developers, and condos are priced in dollars “because they have to recoup their investment in dollars. “.

It reflects the suspicions that some residents have about the squatters. “Their groups have become mafias,” Reyes said. “These organizations bring people together (…) and use women and children as cannon fodder” to avoid deportation. “They won the lottery” by squatting such valuable land, he says.

Many have built second sets of rooms and rent out their original cabins to locals. Some squatters sold their spacious 10 by 20 meter plots for $8,000 to $12,000. Apparently, all invest the money they have in the construction of rooms – sometimes brick, sometimes wood – in a gradual way, as they save enough for materials.

But none have running water or sewer hookups, though condos built in the same camp all have them; some condos even have swimming pools. The squatters rig their electrical connections and make do with primitive wells and septic tanks drilled into the rocky ground, the combination of which is problematic.

Lenin Solís Vega, a construction worker, builds his own house one block of cement at a time. He has been evicted twice from previous lots in the settlement – ​​one of them 20 meters from his current home and where a new condominium is to be built.

And since she built her cabin out of wood and tarpaulin — she planted trees and built a goldfish pond out back — she’s been able to set up her own street food stall in front of her house.