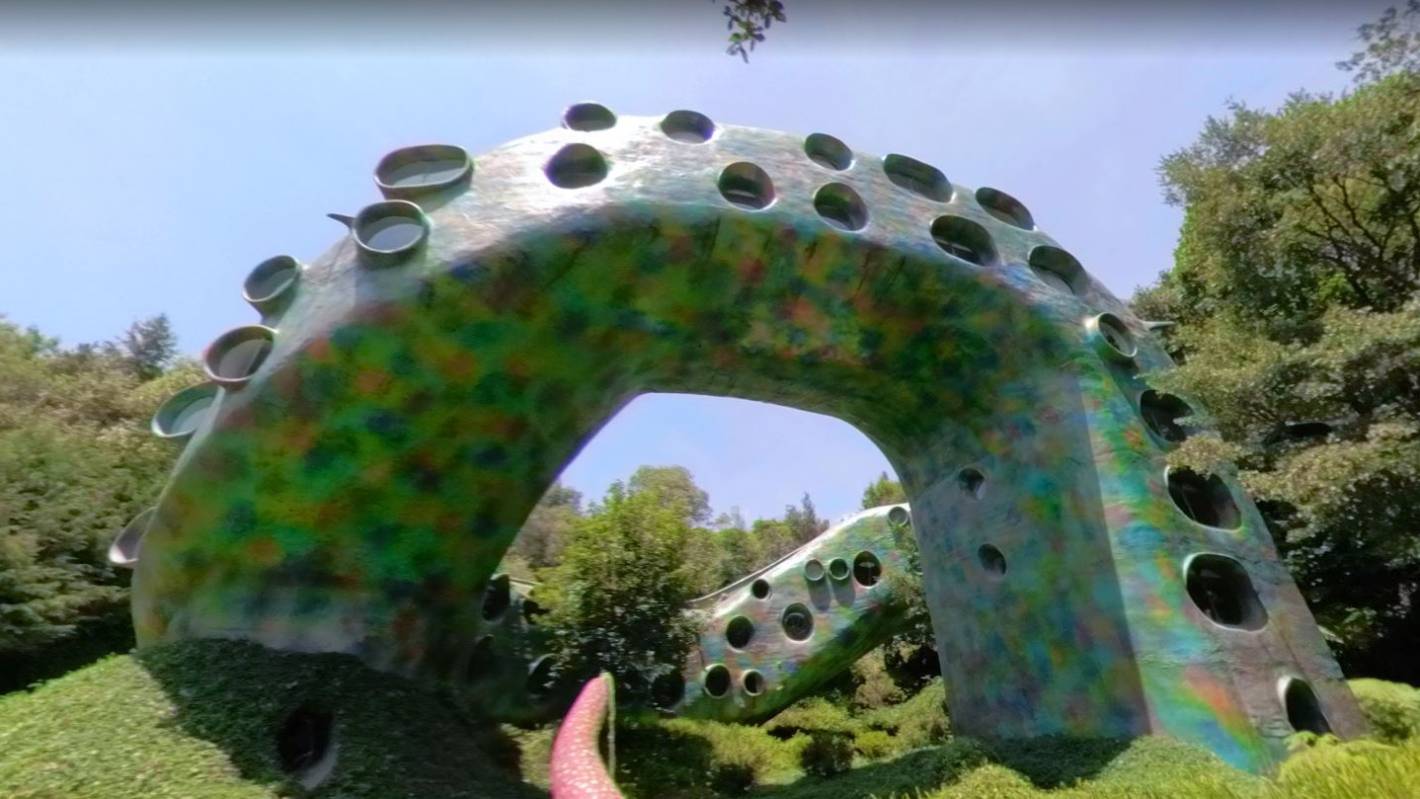 Inside the Mexican building that looks like a snake

Ever wanted to spend the night in the womb of an ancient Central American serpent god? Well, now you can.

Winding through lush parks on the outskirts of Mexico City is a 2,320 sqm, 10-apartment building like no other. Called El Nido de Quetzalcoatl (Quetzalcoatl’s Nest), it was designed by Mexican advocate of organic architecture Javier Senosiain to look like a giant serpent – with a whip-like tail and gaping fangs.

It was inspired by the serpent-like Mesoamerican creator god Quetzalcoatl, who controlled wind and rain, and just like a serpent, the building twists and turns across the landscape, at one point rising several floors above the garden like a giant arch.

According to Dezeen magazine, the building appears to “encourage the visitor to crawl into nooks and crannies, rather than seeing it from a bird’s eye view.”

READ MORE:
* Spend a night in some of the most unique homes in the world
* Home of the Master Builders of the Year is ‘no ordinary bach’
* Best Kiwi Architecture Celebrated in NZIA Awards

The otherworldly design is also a nod to architectural pioneers Juan O’Gorman, Frank Lloyd Wright and Antoni Gaudi, with elements considered trademarks of these architects, such as the use color by O’Gorman, mosaics by Gaudi and built-in furniture by Wright. Quetzalcoatl was also a common motif in Aztec architecture.

Although the apartments are privately owned, architecture enthusiasts can get a taste of Quetzalcoatl life by renting one of the apartments on Airbnb. The listing describes the accommodation as “a physical and spiritual refuge”.

“An oasis in one of the largest and most populated cities in the world. It will awaken your creativity as you walk through our gardens, water basins and common areas.

The three-bedroom, two-bathroom apartments have minimalist interiors “to create a juxtaposition with the outdoors.”

“Each window frames a different landscape. The resort is located inside a natural ecosystem filled with trees, valleys and wildlife.

As an organic architect, Senosiain aims to create more human living environments that are deeply rooted in place and culture.

Begun in 1998, with work beginning in 2001, the structure took six years to complete and the complex’s creative environment, Quetzalcoatl Park, which includes a 5000m² sculpture garden and glass mosaic greenhouse, is still under construction. .

The building is playful and childish, without being childish. The windows are all round, like portals or ladders, and the stairs leading to the upper rooms go up the serpent’s spine, while the water lily ponds help maintain the temperate climate around the building.

Inside, the rooms are cream and wood in color, with mostly built-in furniture, customizable – as in the plush sofas – or organic shapes.

A night in the serpentine belly of this beast will set you back around $643 on Airbnb. However, according to the site, it is sold out almost a year in advance.

Organic architecture has been popular since the 1960s, with homes like the 1970s-built Sand Dollar House in Texas still fetching huge prices for sale.

The property was featured in the first season of Netflix’s World’s Most Amazing Vacation Rentals.

In Aotearoa, New Zealand, the biggest proponent of organic architecture was Sir Ian Athfield, whose vast Wellington house, which cascades down the hillside as if growing from it, received the Sustainable Architecture Award NZIA 2019.