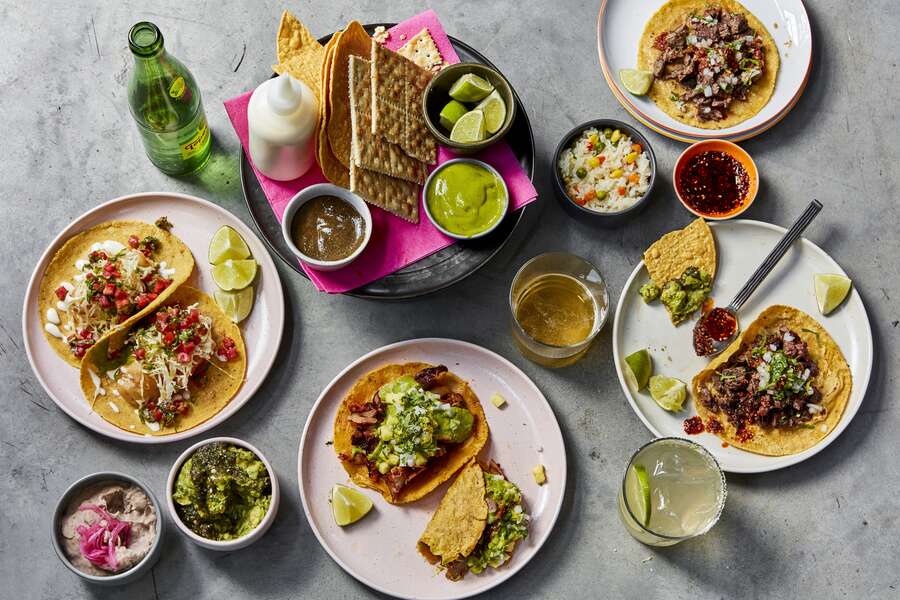 Stephen Starr expanded his restaurant empire by one point this week, bringing his total to 20 seats in Philly alone. But there’s something a little different about LMNO, a new Mexican restaurant in Fishtown based on the food and beach vibes of the Baja Peninsula.

Beyond the fire-grilled adobo lamb shank, tostadas and tacos coming out of the kitchen, and tequila and mezcal drinks sliding through the bar, LMNO is also home to a bookstore, art gallery and a Record listening lounge equipped to accommodate local DJs, making the space a rare all-in-one night out option in Philly.

The kitchen is run by Chef Francisco Ramirez, who started working as a dishwasher at 16 and worked his way up to the bar at Philly hotspots like Vetri Cucina and Starr’s famous French bistro, Parc. The menu centers around a custom high-heat grill, which will embrace dishes like carne asada and grilled chicken thighs, nestled in fresh blue corn tortillas. The Baja influence is also evident on the larger menu, which includes a selection of aguachiles and cocteles, which are casual, shareable seafood dishes that are common in this region of Mexico.

Beverage Operations Manager Mark Murphy designed the restaurant’s cocktail menu with an emphasis on agave spirits. Highlights include Our Daily Veg, a drink of your choice made with fresh juice from cucumber, green pepper, poblano, tomatillo, and cactus juice. There’s also, of course, a signature margarita and a selection of micheladas.

â€œWe were about to open, then COVIDâ€¦ boom,â€ he said. “We sat there with a finished restaurant and a lot of bills to payâ€¦ There are things we would like to do with the space that we can’t at the moment, but we will.”

The 6,000 square foot space can accommodate 200 people in a playful setting with pops of color and black and white checkerboard tables that help channel a bygone era. But there is a lot more to do beyond the dining room. Serge Becker, the New York-based nightlife enthusiast who runs such popular concepts as The Box, La Esquina and Miss Lily’s, was recruited to design a restaurant with patio seating and outdoor verandah, as well as Entertainment features such as a bookstore that was organized in partnership with Dashwood Books of New York, an art gallery and listening room intended to host a rotating lineup of the city’s DJs.

” I admired [Beckerâ€™s] work a long time, â€Starr said. â€œHe has such a rich history in the art world, and I’ve always wanted to do something with him. In this case, space came first, then the idea of â€‹â€‹Baja Mexican, then Serge.

Starr restaurants have been a staple in Fishtown since their first concept, Frankford Hall, opened there in 2011. But this one seems particularly apt, says Becker: â€œPhiladelphia’s young creatives have long taken root in the neighborhood of Fishtown, so the aesthetic reflects that. “

LMNO is located at 1749 N. Front Street. It is open from Wednesday to Sunday from 5 p.m. to 10 p.m. Reservations can be made through Resy.

Maddy Sweitzer-Lamme is a freelance food writer and restaurant journalist based in Philadelphia. Find her drinking martinis, eating pasta and baking extravagant layer cakes on Instagram or her work in posts like Philadelphia Magazine, Eater, Food and wine, enjoy your food, and more.