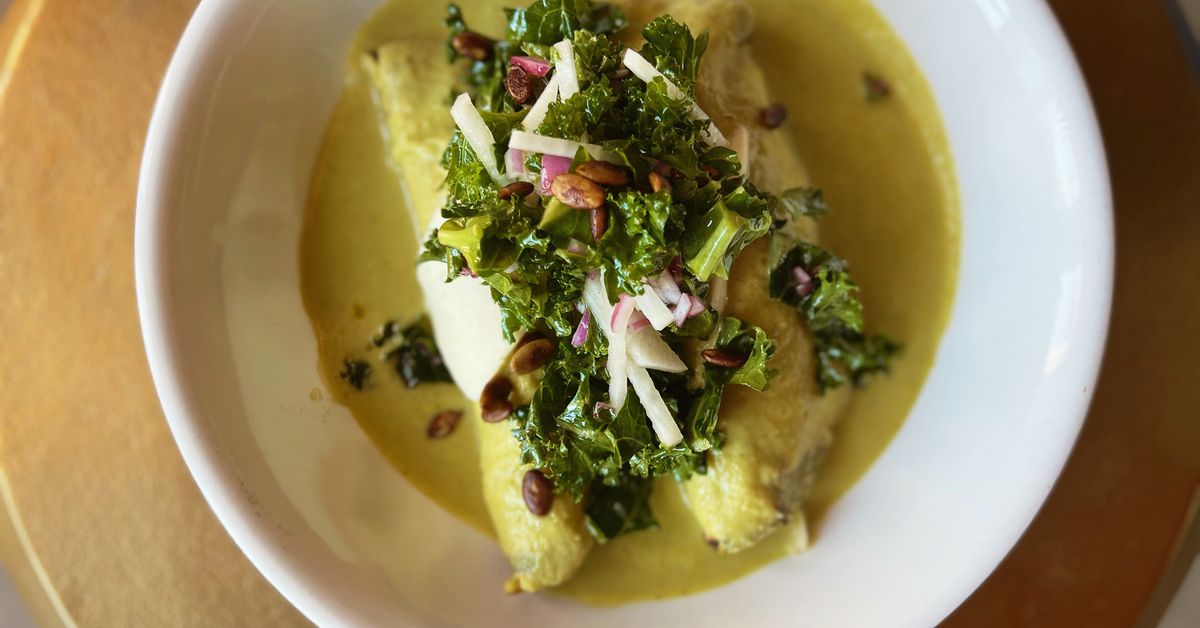 Javier Hurtado’s parents have one of those classic love stories: she owned a restaurant, he was a butcher. While growing up in Mexico, he was surrounded by good food — pots of mole verde simmering for weddings, ceviche eaten on the beach. As an adult, living in the United States, he followed in his parents’ footsteps: he opened the first Cha Cha Cha Taqueria in 2001, expanding across the city over the next two decades. The restaurants are known for their fast, casual dishes loaded with vegetables: Carnitas burritos wrapped in whole-wheat tortillas, bowls covered in black beans and rice, tempeh tacos with kale and onions.

But in June, Hurtado opened a new restaurant, very different from the other Cha Cha Chas in town. Dinners start with bowls of chapulines or grilled grasshoppers dressed in lime and salsa. Couples share shrimp and bay scallop ceviche and enmoladas dipped in mole negro. Roasted poblano peppers arrive on tables stuffed with shrimp, scallops and mushrooms. CintliHurtado’s latest canteen in the heart of University Park is his pet project, a “modern Mexican cocina,” in his words.

Before Cintli was Cintli, it was a Cha Cha Cha. Hurtado opened the site in 2011, but when the pandemic hit and University of Portland students left campus, it never really got back on its feet. Instead, Hurtado closed the restaurant and started working on something new. “I wanted to do things a little different from what we’ve been doing for 20 years,” he says. “A lot of recipes are what I grew up eating.”

One dish, in particular, is very close to one of his favorites: quesadilla covered in Huitlacoche, an earthy fungus that grows on corn. When he was a child, he would order Huitlacoche quesadillas from market vendors in his hometown, Cuernavaca; if he didn’t order eight-lacoche, it was rajas, or strips of tender poblanos. Both make an appearance on the restaurant menu, mashed between blue corn tortillas.

Another family staple that occupies an important place on the menu: the mole. An agave-roasted lamb shank arrives with a kick of mole negro, while medallions of lengua, or cow’s tongue, complement the mole verde and greens. Enchiladas stuffed with queso panela are topped with mole amarillo and surrounded by vegetables. “We tried to strike a balance where there is some originality,” says Hurtado. “Like lamb shank – I had this guy who said, ‘I would never put a mole on a lamb shank, and it’s the most delicious thing I’ve ever had.’ We want to be creative.

This creative inspiration is also evident in the cocktail menu, which leans towards cuisine in its approach: Cintli’s bar team infuses gin with nopales for a highball and bolsters its margarita with basil and serrano chiles. The sea bass version on a Jungle Bird uses a hibiscus-infused Campari; hibiscus also appears in sour mezcal, made with Banhez mezcal. Hurtado also wants to expand the bar’s mezcal selection, including more ancient mezcal.

Although the restaurant has a strong bar program, Hurtado wants the restaurant to be a family-centric place first. The menu includes a kids’ menu, with shredded chicken tacos and quesadillas. “I have a four-year-old and an eight-year-old,” he says. “We’ve had a lot of families coming in, having cocktails like a night out with their kids – being a parent, there aren’t a lot of options.”

Part of Hurtado’s goal in creating Cintli was to create a restaurant that worked well in the neighborhood – very residential with lots of families, but also a nearby college. For him, that meant walking a line between accessible and quirky, lively yet relaxed, while serving dishes that excite him. “I’m there every day,” he says. “I work with two cooks who have been with me for 12 years, we work together at Cintli… It’s a menu that will constantly evolve.”