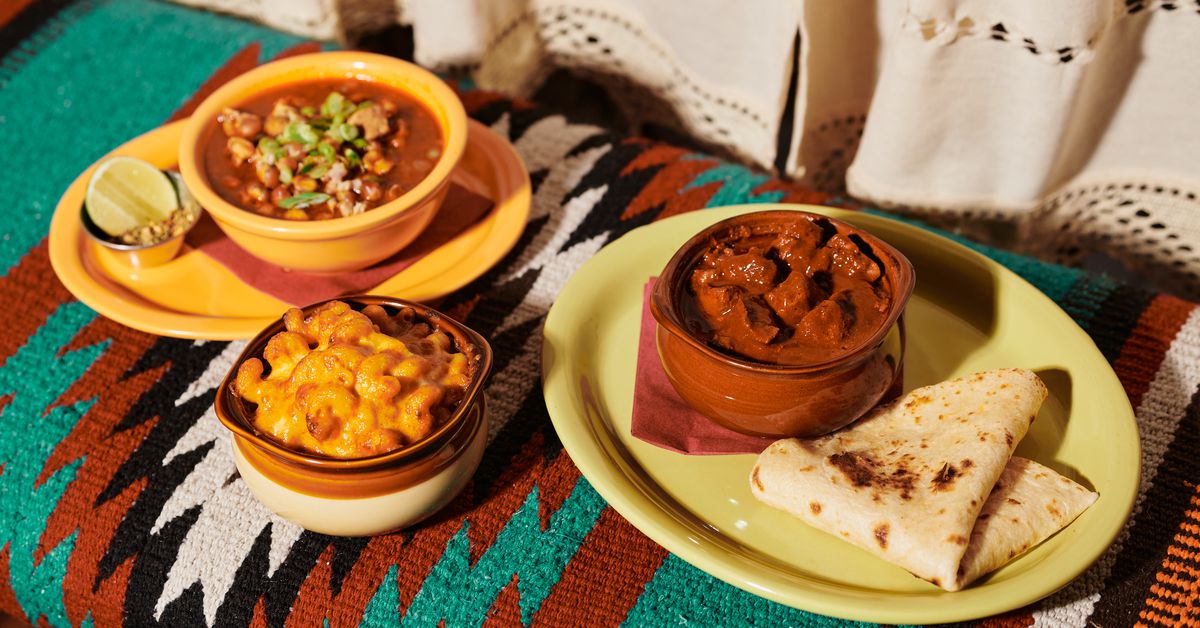 In October of last year, when co-owners and spouses Melissa Klein and John Watterberg opened Santa Fe BK in Williamsburg, they only served three varieties of Southwestern-style burritos, fries, and a green chili burger. It was a small but mighty menu that Eater’s senior reviewer Robert Sietsema said had “hooked” him and sent him on a nostalgic trip down memory lane. After months of waiting for their liquor license to be approved and suspended in limbo, they are finally launching dinner service at their restaurant – located at 178 North Eighth Street near Bedford Avenue – on Friday, April 22.

Although the opening of their own restaurant is long overdue, it has also been a complete return to the couple’s roots in the hospitality world.

Coincidentally, Klein and Watterberg first met at an independent restaurant called Santa Fe on Union Avenue in 2007. While the long-defunct restaurant didn’t focus on regional New Mexican cuisine, it unlocked something between them: Their stays at this restaurant were short-lived, but that summer, with Watterberg behind the bar and Klein as waiter, they fell in love. Since then, the two have collectively worked in the hospitality industry for two decades (most recently at places such as Dumont, Red Cat and Motel Morris).

“Since we left [that restaurant] Santa Fe, we dreamed of opening up a romantic, whimsical space where people could fall in love and, through romance, make the world a kinder, sweeter place,” says Albuquerque native Watterberg. As owners of their very first spot, they set up a profit sharing plan. According to food streetKlein and Watterberg plan to have surge bonuses, where a percentage of the restaurant’s sales during the shift will be added to the hourly wage: “The busier you are, the more money you make,” Klein told the publication. at the time.

Thanks, in part, to Crown Heights’ hit Ursula, new Mexican cuisine has begun to gain more attention in the city. Watterberg and Klein are excited to be part of the growing conversation: “For a long time, it was one of the few cuisines that was seriously underrepresented in New York City,” says Watterberg.

During dinner, customers will find enchiladas and smothered burritos, each with the option of being served with either red or green chilies (a little lesson from the team: a green chili becomes a red chili as it dries and changes color with time), or in local parlance, “Christmas style” with both. The burrito and enchilada can be stuffed with green chili chicken, pork adovada, picadillo, or beans.

The kitchen is run by Nic Gonzales, a former Roebling Tea Room and Metrograph kitchen, who runs Besos Locos, a Sonora-style pop-up that’s a nod to its Tucson roots. Special Besos Locos offers will occasionally appear on the menu. Watterberg and Gonzales met while playing in bands in the early ‘s.

All of the flour tortillas used throughout the restaurant are handmade and pressed. “There’s a restaurant called Frontier in Albuquerque, and one of the components of their great breakfast burrito is handmade flour tortillas,” Klein says. “We called them and said, ‘We know we can’t have the recipe, but maybe you can point us in the right direction. “”The restaurant told the duo that they had to buy a Be & Sco tortilla machine, which now lives in the restaurant (allegedly, according to the team, it’s just one of two Texas-based machines that are in use on the East Coast).

Among the lighter dishes at Santa Fe BK is a beet salad with carrots, cabbage, cotija, pepitas, and lime-cumin dressing (the only thing on the menu that’s a reinterpretation of a dish from the original Santa Fe restaurant where they met). For snacks, there’s a pozole, green chili fries, or fries with Gonzales’ green chili queso dip, a trio of salsas, or guacamole.

The current day menu will essentially remain the same, with breakfast burritos and burgers served through a take-out window. There are no immediate launch plans for domestic daytime service.

But no matter the time of day, Hatch Green Chilies are the center of attention.

“New Mexican cuisine has evolved around the abundance of green chilies in the region. This is the only place in the world where chilies can grow with that particular flavor,” Klein says. “So we imported 1.75 tons New Mexico green chili, and here it is ready to delight people.”

It is also one of their biggest food costs. The team is working to get a full pallet, which contains 60 boxes, delivered each month. “We spend a lot, but the food could never be what it is without the New Mexico chili pepper, so in our book, it’s definitely worth it,” Klein says.

The menu is meant to be paired with one of their nine hand muddled margaritas, whose flavors range from passion fruit to blood orange.

“It’s an incredibly tedious and laborious process,” says Watterberg, a technique he learned at the restaurant where he met Klein. “You can’t squeeze fresh lime juice because the acid in the lime starts to break down…it tastes different every hour.”

There are a few off-menu items for those in the know: A secret spicy margarita, for one. The free dessert of sopapillas is also not listed on the menu. As the restaurant opens, there will be other off-menu calls on social media, such as an option for burritos to be fried into chimichangas.

Some New Mexico items have been harder to find. “New Mexicans are really happy to be on their own and do their thing, and not feel this need to grow,” Watterberg says. “For example, we can’t get New Mexican beer for the bar – and there are tons of breweries – but they haven’t applied for a license here.” In the meantime, they are turning to New York breweries and Mexican beer.

The restaurant, even in its early days serving limited breakfast and lunch menus, has struck a chord with Southwestern state transplants by creating a sense of home. “There’s an emotional connection,” says Wattenberg. “So many people who squeeze their hearts and say, ‘Now my mom doesn’t have to send me green chili anymore. “”