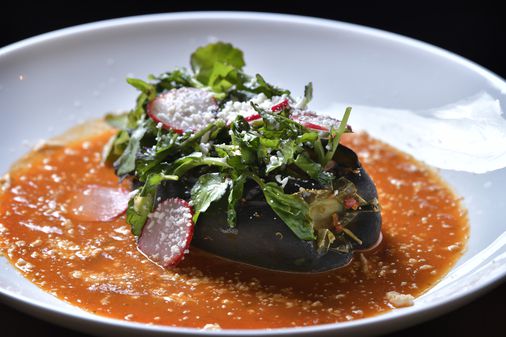 “Rosa Mexicano eschews the leaden, starchy cliches of most New York Mexican restaurants and tries to serve what Mexicans really eat. It’s also one of the few places you won’t want a stretcher to take you back. at your house after dinner,” the New York Times reported in 1986, when many of the waiters at Burlington Mall’s Rosa were likely unborn.

Rosa’s new culinary vice president, Manuel Trevino, says the brand has stagnated over time. Change of ownership ; the pandemic has taken its toll; the menu veered towards Americanized dishes.

“There wasn’t much change in the brand, and there really wasn’t any excitement behind it. If you ask anyone who knows the brand, they’ll always say the same thing: ‘Oh, I’m remember Rosa, I ate there. I haven’t been there for so long,” he says.

There’s now a revised menu and more locations, including one in Boston.

“My goal was to make Mexican food the way it should be made. I’m Mexican-American; I grew up in a Mexican family. … The best food in Mexico is usually found in someone’s home. We wanted to bring that kind of friendliness to restaurants,” says Trevino.

Rosa is the latest New York restaurant to open in Burlington, following Parm and Shake Shack.

“The Burlington Mall… is almost starting to become a culinary destination,” he says, a statement that would likely shock anyone who had reached adulthood in its food court around 1995 (me).

what to eat The menu here is very different from the always packed and slightly cheaper Border Café across the street, which specializes in Cajun and Tex-Mex and has an atmosphere reminiscent of a camp dining hall. of summer. (I say this with love.)

Here, the guacamole is prepared at the table by a waiter with panache – sometimes helped by young guests, on request. It’s creamy and rich, blended to your desired level of spice and topped off with extras like bacon, crabmeat or grilled pineapple. Also good: velvety queso (add chorizo ​​if you like) over super thin, super salty chips. Rosa is also known for her enchiladas, which are well rolled and generously sauced. Try the trio: taupe hazelnut poblano; red guajillo pepper; and a fresh and vibrant tomatillo salsa verde.

There’s also an interesting twist on the classic chili relleno, usually a roasted poblano pepper stuffed with Oaxaca cheese. Here it’s lighter and arguably healthier, filled with quinoa, black beans and corn, topped with a tangle of watercress, all in a zesty chipotle sauce. It’s satisfying, but I also missed the ultra-cheesy, ultra-oily version.

If you’re in a group, try the parrilladas: a sizzling mixed grill with all the protein your heart desires: red chili chicken, grilled chorizo, jumbo shrimp, and more, alongside stuffed jalapenos, vegetables, guacamole, beans, salsas, and warm corn tortillas.

What to drink: Rosa has always been known for her margaritas (mango, pomegranate, blood orange), especially the spicy cucumber with jalapeno infused tequila, cucumber juice and a chili salt rim. Unfortunately, my version was watered down, encumbered by a large, unsightly piece of cucumber. Also missing was the promised rim. Better: the Mezcalrita with a high agave content, which arrives at the table smoking on a layer of dry ice.

Take-out: The service here is quick and attentive. When my son’s Sprite tasted like seltzer, an apologetic waiter quickly took it away and warned another table to order soda. When we needed the check it was produced instantly knowing we were heading to a movie down the street. The food craves sophistication, and there’s plenty on the menu (ceviche, birria tacos served with consommé for dipping, prawns with chile de árbol). If they up their margarita game – and finish their patio, which was under construction when I visited – it might soon be easier to get a table at Border.