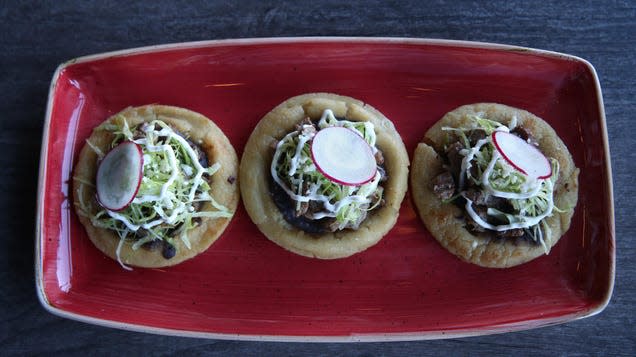 The best thing you don’t order at a Mexican restaurant

At any Mexican restaurant, you’ll find staple dishes such as a taco dinner, torta dinner, or enchiladas. These are all delicious options (my mouth was watering just as I typed them), but I think it’s time to highlight a lesser-known Mexican menu item: soup.

Sopes are small round cups of cornmeal topped with a variety of ingredients. Originating in Mexico, they are formed by hand from corn flour that is turned into a soft but firm dough when cooked.

Sopes can usually be found on the menu, but that’s not what most people are looking for or thinking of when they say, “Hey, let’s get some Mexican food.” Tacos and tortas are more widely recognized in American pop culture, but in Mexico, sopes are a street food to be reckoned with.

“They’re antojitos, so street vendors sell them,” says food and lifestyle writer Claudia Alarcón. Antojitos, translated by little cravings, are snacks typically sold by street vendors in Mexico, but they can also hold their place in the à la carte section of restaurant menus. You can also think of them as appetizers to enjoy alone or in a group.

Corn, with its tiny golden nuggets, has next to no nutritional value, and yet it couldn’t be more important to traditional cuisines of mexico. I’ve said it once and I’ll say it again: you can trace much of North and Central America’s food history back to corn. Corn is king and has reigned for many years. Sopes are another example, as they are essentially small shells of corn flour formed with raised edges to hold ingredients. Alarcón describes them as a humble and simple food.

Sopes can be topped with a plethora of things including beans, chicken, carnitas, Mexican chorizo, lettuce, tomatoes, cheese, salsa, avocado and more . The possibilities are almost endless and their versatility is just one of the many things that make these portable corn boats so delicious.

Its raised edges and thickness distinguish the sope from other antojitos. The slightly bowl-shaped center lets you stack the toppings high, and the thickness helps it stand up to whatever you pile on top of it. Sopes can be heartier than tacos because the dough is heavier than a tortilla, but at the same time they can be an appetizer depending on the size of each. They also hold together better than a tostada, which breaks down into smaller pieces as soon as you bite into it.

You still have the option of eating sopes with a fork and knife, but they’re really meant to be eaten by picking one up and taking a big bite.

My favorite order at Mexican restaurants has long been two shredded chicken sopes with beans, lettuce, tomato, avocado, a squeeze of lime, a little sour cream (not a huge dollop) and green salsa for a little more flavor. Two sops is the perfect portion, because if I’m really hungry I’ll eat both, but if I don’t want to get full too quickly before my entree arrives, I can take the leftovers home; a to-go sope is a great snack or meal for later.

If you’re one of those people who look forward to a weekly taco night, I definitely suggest switching things up with a sope night. I’m sure you think that because the base has to be formed from masa, it’s more work than your usual taco night spread, which just involves a bag of supermarket tortillas. Do not be afraid ! Prefabricated sopes exist, and if you buy them this way, you are not mistaken. These sopes are preformed into the desired cup shape, are uniform in size, and can be found at most grocery stores that carry other Mexican food items.

If you buy premade sopes, you can fry, grill, or bake them. Reheat them any way you like, then just load up the toppings. The more traditional option would be to fry them, and that’s what I tend to do.

If you want to make sopes by hand, hats off to you, because it’s going to be a bit more complex. To make the sopes yourself, all you need is corn flour, water and a pinch of salt, writes a Mexican cook Maricruz Avalos.

From there, however, it’s up to you to mix the ingredients and get the consistency right. Dough too crumbly? Add more water. Dough too sticky? Add more corn flour. Once you have a smooth, malleable dough, you can take a small ball of dough and flatten it to your desired thickness.

The hard part will be forming the edges that make a sope what it is. You’ll need to cook the sope halfway through, then remove it from the heat to shape the edges by hand. Protect your fingers with a paper towel or oven gloves, then return the partially baked newly shaped sope to the oven (or whatever cooking method you use). After that, it’s all garnish and great food.

The next time you order Mexican food at a restaurant or plan to try a new recipe at home, I suggest some sopes. They don’t get enough love.

6 reasons why a personal loan is ideal for debt consolidation