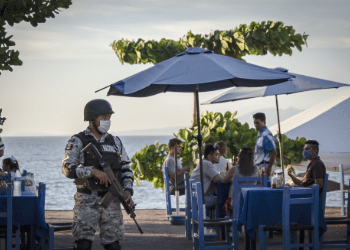 Recent US sanctions against an alleged member of the Jalisco Cartel have revealed that the powerful Mexican group is using the resort town of Puerto Vallarta to process drug money from nightclubs, bars and restaurants.

The US Treasury Department accused Sergio Armando Orozco Rodríguez, aka “Chocho”, of having ties to senior members of the Jalisco Cartel New Generation (Cartel Jalisco Nueva Generación – CJNG) in a February 17 announcement. Treasury officials said Orozco Rodríguez has multiple businesses in Puerto Vallarta, where he is accused of laundering money for the cartel and running his extortion rackets in the West Beach destination.

New businesses had to get “unofficial permission” from Orozco Rodríguez to open and pay regular fees to the CJNG, according to the Treasury Department.

“The cartel uses this renowned tourist destination as a strategic stronghold not only for drug trafficking but also for money laundering, extortion, kidnapping and assassination,” he added.

Orozco Rodriguez is the fourth CJNG member from outside Puerto Vallarta in recent years to be blacklisted by the Treasury Department.

In April 2021, Treasury officials accused Francisco Javier Gudino Haro and Carlos Andres Rivera Varela of being alleged members of a Puerto Vallarta-based CJNG law enforcement group. The Treasury Department said in its statement that the men “helped orchestrate assassinations using high-powered weaponry in the name of CJNG,” referring to the high-profile assassination of the former governor of State of Jalisco, Aristóteles Sandoval, in December 2020 in Puerto Vallarta.

Gonzalo Mendoza Gaytan, aka “El Sapo,” was also hit with sanctions in 2019. Treasury officials described him as a senior member of the CJNG who served as the group’s leader in Puerto Vallarta.

With each new blacklist, the resort’s key role in the operations of the CJNG becomes clearer, particularly with respect to the synthetic drug trade.

Unlike other major tourist destinations in the country, the CJNG appears to have control of Puerto Vallarta, a CJNG stronghold in the state of Jalisco where its members derive income from extortion, money laundering and human trafficking. Human being.

The CJNG is also heavily involved in smuggling the deadly synthetic opioid fentanyl into the United States. Puerto Vallarta is considered an integral node in this supply chain, receiving shipments of precursor chemicals and fentanyl analogues from China. The drugs are then transported north to the Mexican state of Baja California, where they are smuggled across the border into California and Arizona.

We want to maintain the largest database on organized crime in Latin America, but to do this we need resources.

What are your thoughts? Click here to send your comments to InSight Crime.

We encourage readers to copy and distribute our work for non-commercial purposes, with attribution to InSight Crime in the byline and links to the original at the top and bottom of the article. See the Creative Commons website for more details on how to share our work, and please email us if you use an article.